The Catalan Water Agency (ACA) commissioned a project to minimize the emission of odors from the primary sedimentation tanks of the Wastewater Treatment Plant (WWTP) of Cambrils (Tarragona), emissions that usually generated complaints from the neighborhood.

BION was selected as the candidate to carry out an interesting project that consisted in the treatment of gas phase pollutants (mainly H2S) emitted into the atmosphere.

The main source of odors in the primary settling tanks is the area where the clarified water falls to the next stage of treatment through small water jumps. It is at this point that significant amounts of volatile organic and inorganic compounds are released.

Bioconservacion suggested covering this area in order to prevent the release of free H2S into the atmosphere. Once this space was confined, two reactors were installed, packed with specific filter media for H2S elimination, namely BION Carb OX (with an adsorption capacity of up to 80% by weight).  Both reactors were designed to treat up to 750 m3 / h.

A possible solution in this case is to confine the settler by installing a dome covering the entire tank and connecting the gas phase to media-packed reactors.  In this case, a 29 m diameter dome would be needed and the required processing capacity would be 20,000 m3/h. However, by confining only the problematic zone (outer crown) the flow to be treated would decrease to 1,500 m3/h. Obviously, this proposal also represents a much more economically advantageous civil work than a total confinement.

In summary, the solution proposed by Bioconservacion represented a 50% saving in the initial investment compared to the usual solutions for this type of facility, and also a significant reduction in subsequent operating costs.

In addition, the crown covers were designed in such a way that they could be removed from the perimeter of the sedimentation tank to facilitate maintenance tasks. 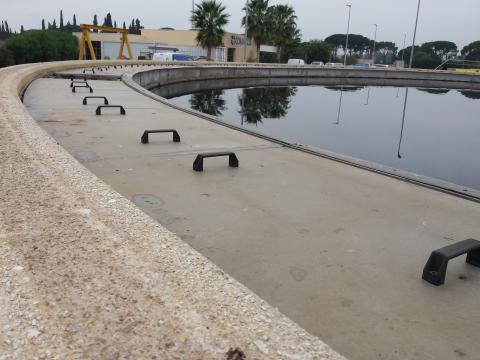 This installation was carried out at the end of June 2010, and since then, problems related to nuisance odor emissions have ceased.

Since its implementation, Bioconservacion has supplied the filter media and has maintained close contact with the plant's personnel. This collaboration allows us to better understand the real needs of each sector and to develop products that are better adapted to them. Among the projects that the Research and Development Department is working on, there is one that aims to carry out field tests with a new filter media developed specifically for environments with humidity above 99%.  Discussions are currently underway with the Cambrils WWTP to carry them out jointly at their facilities.