BION has successfully carried out the elimination of toxic and corrosive gases, we are referring to H2S and Ammonia, from the hazardous waste blending and neutralization project that the company Hidronor, Gestión y Tratamiento de Residuos, carries out in the town of Noviciado near the Arturo Merino Benitez International Airport in Santiago de Chile. Its work process generates an important emission of gases from storage tanks and in blending and neutralization processes, acid and basic.

Hidronor, specialized in the neutralization and final disposal of hazardous waste that by law cannot be disposed in sanitary landfills (place where only organic waste must arrive), entrusted BION with the job of eliminating the hazardous waste neutralization process, which until then generated approximately 200 ppm of hydrogen sulfide gas and 50 ppm of ammonia. For this purpose, BION, after receiving information about the emissions and the quality of its facilities, used a deep bed with 3 different chemical media, BION Oxyl, BION Ac Active Max and BION ACPA, specific for the elimination of the aforementioned gases and with which the generation of gases, caused by the process, are totally controlled for up to 6 months of continuous operation. 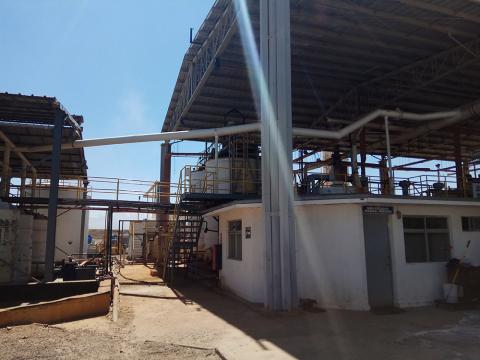 Regulations in the chemical or process industries

Santiago de Chile was declared a couple of years ago as a contamination saturated zone, so filtering products must be of high quality. Hidronor and other chemical or process industries are controlled with strict environmental standards that must be met, or they could be shut down.  That is why after being installed our chemical media Hidronor becomes one of those companies that satisfactorily comply with these regulations.

Technical specifications and results of the emissions neutralization project at the Hazardous Waste Neutralization Plant.

Safety and Corrosion Protection in Refineries

The environment in a refinery is highly corrosive, which makes it necessary to implement control systems not only to protect people but also the equipment that controls the processes to ensure their reliability.   Bioconservacion has equipment specially designed for the safety of people, to protect against corrosion in control rooms and cabinet pressurization equipment. Some CEPSA refineries in Spain have installed some of this equipment.   Specifically, the CEPSA Gibraltar San Roque refinery in Cadiz was equipped with a packed bed system for personal safety, specifically a Packed Bed System (PBS).   The packed bed system includes the following filters: - G4 particulate filter, this is a pre-filter that collects dust and traps larger particles, protecting grids and granulates. - Vertical beds, the air passes through the holes in the perforated plate and passes through the BION filter media, which are determined according to the pollutants to be treated.  The filling of these vertical beds is a relatively simple job. No tools or highly skilled specialists are required. - Final particulate filter type F7, this is a higher efficiency filter for particulate removal. The equipment has to protect a room of 155 cubic meters where, if necessary, seven to nine people would be accommodated for a time of 20 to 30 minutes. This time should be achieved with two different contamination scenarios: - Scenario 1, 10280.00 mg/m3 SH2 80%+various hydrocarbons 20%. - Scenario 2, 10900.00 mg/m3 HF.  The CEPSA Tenerife refinery has installed a UPP (Positive Pressurization Unit) where part of the outside air is taken, cleaned and pressurized in a control room of about 60 square meters. Additionally, a part of the air is used to re-circulate and clean the air from possible indoor contaminants and door openings.   It is designed to provide positive pressurization with air free of corrosive gases in environments containing computers, control rooms, motor control centers and electronic or electrical equipment.   There are two types of configurations: horizontal and vertical. However, the equipment is tailor-made according to the customer's particular needs and desired specification.   There are different filter media to remove various types of gases. The most common are: hydrogen sulfide, sulfur dioxide, nitrogen oxides, chlorine compounds and ammonia.   In the refinery there is a set of transformers that switch from 220 to 110 v. The electrical cabinet pressurization equipment installed there must meet two requirements: it must be sufficiently ventilated so that the equipment does not heat up and the air introduced into it must be cleaned.   Bioconservacion has a fully equipped laboratory to ensure good corrosion control. By analyzing coupons, corrosive agents are characterized and the aggressiveness of the environment is classified according to the ISA 71.04 standard.   The laboratory is also capable of measuring the remaining life of filter media, a service it offers to its customers to ensure timely replacement of media.

Corrosion, the invisible enemy of WWTPs

Corrosion is the natural process in which metals degrade. This process is influenced by external factors such as humidity, temperature and corrosive gases, mainly active sulfur compounds, sulfide oxides and nitrogen oxides (H2S, SO2, SO3, NOx).   In pumping stations and sewage treatment plants these factors are present, even in very low concentrations (parts per billion), and are the cause of technical and operational failures due to degradation of electrical components. In order to prevent corrosion-sensitive electrical or electronic equipment from suffering, it is important to take preventive measures.   The solution is to perform a good prior analysis of the environment in corrosion-sensitive areas, install specific air filtration equipment with the appropriate media.   CORROSION COUPONS + BION FILTER MEDIA + SPECIFIC EQUIPMENT = EFFICIENT SOLUTION AGAINST CORROSION   To detect and act reliably against corrosion, BION has an action protocol. The process starts by sending and placing corrosion coupons in the rooms or environments susceptible to corrosion. After 30 days of exposure, the coupons are sent to the laboratory, where an exhaustive analysis of the gases that have been in contact and their concentration is carried out, determining the level of corrosion present in the environment.   Our laboratory is equipped with the necessary technology to investigate and analyze all types of gases derived from the wastewater treatment activity.   BION's team of chemists and engineers determines the best solution for each case. Usually the solution involves the installation of an air filtration equipment with an average according to the results obtained with the coupon.   In this way, carrying out a correct preventive action can fight against the invisible enemy that is corrosion and avoid the appearance of its adverse effects in installations, piping, data centers and vulnerable electronic components among other elements.   For more information about corrosion please visit: https://www.bioconservacion.com/corrosion-control

Corrosion Control in the Paper Industry

It is a fact that corrosion has a significant economic impact on an industrial scale. As an example, the results of a study carried out in the USA showed that the estimated annual cost due to corrosion was $276 million, which is approximately 3.1% of the country's gross domestic product (GDP). It is logical then that, during the last decades, great efforts have been invested to face this problem and significantly improve corrosion management, offering better solutions, better equipment and new materials adapted for this purpose.   But what do we mean by "corrosion"? It can be defined in many ways, among the different meanings, we could say that corrosion can be the deterioration of materials by chemical interaction with their environment. Although the term corrosion is sometimes also applied to the degradation of plastics, concrete and wood, but in general it refers to metals.   The main problem is corrosion occurring in large industrial plants, such as power plants or chemical processing plants, where corrosion can even lead to plant shutdowns and/or production stoppages, with the economic consequences that this entails. In particular, the paper industry is one of the industries most susceptible to this problem, which is why they invest in systems to reduce and control corrosion levels.   Project Description   BION has extensive experience in this sector and in recent years has improved the solutions suggested to avoid equipment failures due to corrosion. In the last 4 years Bioconservacion has supplied a mixture composed of BION ISORB and BION DOD to a pulp and paper plant located in Uruguay, specifically at the UPM plant in Fray Bentos. This plant is located on the banks of the Uruguay River, 4 km east of the city of Fray Bentos in the province of Rio Negro, and has a production capacity of 1.3 million tons per year of bleached eucalyptus short-fiber pulp for the manufacture of glossy paper and tissue paper.   PBS (Parallel Bed Scrubber) equipment was installed in this plant to prevent the deterioration of electrical components due to corrosion. The PBS equipment is a system similar to a SAH equipment, where the filter media are packed in bulk instead of using modules. This type of system can treat horizontal flows between 425 and 54,000 m3/h. On this occasion, the installed equipment is composed of two treatment stages, each with specific filter media in order to obtain maximum efficiency in the elimination of complex air emission.   After studying the composition of the main pollutants present in the installation, Bioconservacion suggested two filter media, which in combination can successfully remove most of the problematic compounds present in the stream. This specific mixture is composed of BION ISORB and BION DOD.   BION ISORB is designed to successfully attack a wide range of gases. It is especially recommended for the control of acid gases, nitrogen containing compounds, sulfur compounds and low molecular weight gases. BION ISORB uses a combination of two processes for contaminant removal. One of a physical nature, trapping the molecules inside the pellet due to its large internal surface area and a second by chemical oxidation. The oxidized gases are converted into harmless products. A particularity of BION ISORB is that it maintains its effectiveness even in the treatment of streams with relative humidity contents up to values above 95%.   This filter media is commonly used in applications such as wastewater treatment plants, pulp and paper plants, airports, chemical plants, refineries or laser cutting and engraving plants.   In turn, BION DOD is a high purity, high surface area, bi-impregnated activated carbon that effectively neutralizes acids.   BION DOD is a filter media widely used in water treatment plants, it has a very high H2S absorption capacity and is very useful for the treatment of mercaptans and other volatile organic compounds. It is a filter media especially suitable for neutralizing acidic compounds.   Evaluation   UPM Fray Bentos has been working with this PBS equipment and BION ISORB and BION DOD filter media to effectively prevent corrosion for 4 years. The client has been able to extend the life of its equipment and save costs due to maintenance shutdowns.   Bioconservacion also offers the service of performing an analysis of the remaining life of the filtering granulates, halfway through their estimated life, in order to re-optimize the replacement of the granulate mixture in the event that the actual working conditions differ from the initial conditions taken into account in the characterization.