Desulfurization and reduction of siloxanes in biogas

Reducing the carbon footprint of our society is essential. This can be achieved by capturing and confining anthropogenic CO2 emissions, as well as by replacing fossil fuels with renewable fuels.

MCFCs (Molten Carbonate Fuel Cells) are the only ones capable of doing both. Thanks to their principle of operation, CO2 can be extracted from a gas stream on the cathode side and fuels such as biogas can be converted into electricity on the anode side. However, the degradation caused by the pollutants present in these gases must be addressed.

In this sense the project "MCFC catalyst and stack component degradation and lifetime: Fuel Gas Contaminant effects and Extraction strategies" aims to tackle this problem from two sides:

1) the investigation of the mechanisms of poisoning caused by fuels and to determine precisely the MCFC tolerance limits for long-term endurance;

2) optimization of fuel and gas cleaning to achieve adapted degrees of purification according to the operating conditions and MCFC tolerance.

CETaqua (Centro Tecnológico del Agua), a company belonging to the Suez group was involved in the project, where one of its main objectives was to test on a pilot scale, alternative adsorbent materials to activated carbons that were being conventionally used in most wastewater treatment plants (WWTP). 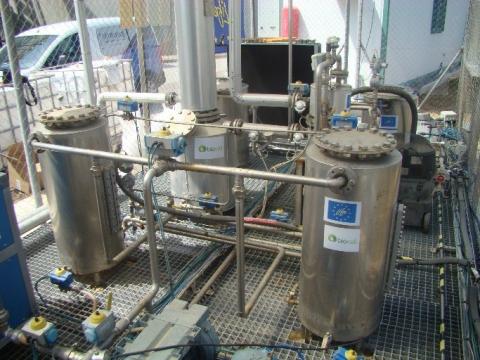 To this end, CETaqua contacted Bioconservacion and a biogas purification project was carried out at the Mataró WWTP (Barcelona), a two-stage system. The system consists of two identical lines composed of a first vessel filled with 3 mm BION SIGMA (formerly Bi-On Fe) to remove H2S and a second step with a vessel filled with 4 mm BION AC for VOCs and extraction siloxanes (Figure 1).

The tests last about half a year and the results were evaluated at a rate of 10Nm3 / h, and the contaminant concentrations were in a range between 700-2000 ppmv and 4-5 mg / m3 for H2S and siloxanes, respectively.

In reference to H2S removal, the average results are summarized in Figure 2. 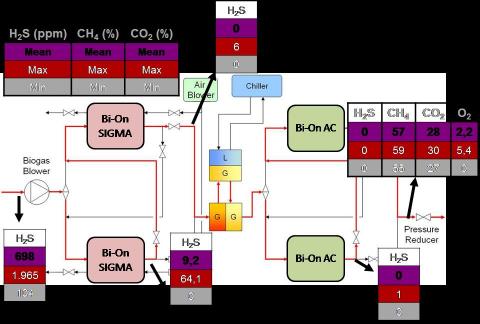 As can be seen, H2S was successfully removed in both lines and only during certain episodes, where peaks were measured, significant amounts of H2S were detected at the outlet of the first stage, but always maintaining removal efficiency values of more than 95% (Figures 2). Either way, the second vessel filled with CA Bi-On, not only removes siloxanes and VOCs, but acted as a polishing stage that resulted in negligible H2S concentrations after the overall purification system.

Figure 3 clearly shows that Bi-On SIGMA was depleted, as both colors can be distinguished before and after use.

As for siloxanes, BION AC achieves removal efficiency values of about 30%, a value that might seem low, but there is a wide variety of siloxanes and not all of them are effectively removed with the same carbon quality. Therefore, depending on the siloxane to be removed, we could suggest one or another type of carbon. Taking into account that no characterization of siloxanes had been done before, the results obtained must be considered satisfactory.

In summary, biogas purification system was successfully carried out and the biogas could be employed in fuel cells.

We live in a world where pollution constantly surrounds us. There are a multitude of polluting gases both outdoors and indoors that affect us in an invisible way. Pollution from outside can cause serious respiratory diseases such as pneumonia, cough, lung cancer, asthma, etc. and cardiovascular diseases among others. What is not so commonly known is that inside homes and buildings can also have an environment 5 to 10 times more polluted than outside, according to the WHO. Currently, people living in urban environments in industrialized countries spend up to 90% of their time indoors. These data reveal that it is necessary to have good air quality in closed environments and thus avoid the discomforts generated and stimulated by poor air quality. Some of the most common consequences are headaches, dizziness, nausea, persistent colds, irritation of the respiratory tract, etc. On the other hand, living in buildings with adequate indoor environmental quality can bring great benefits: - Increasing environmental comfort - Increased productivity - Decrease short-term sick leave - Reducing viruses and bacteria in the environment - Reducing the risk of respiratory disease contagion - Decrease the risk of allergic sensitization. Fortunately, technology makes it possible to actively treat bacteria, pollution and many of the pollutant gases present. BION as an expert in gas filtration focuses its knowledge and commercial offer on the elimination or treatment of the most common gases present in environmental pollution.   Target Gas Indoors Formaldehyde α-pinene VOCs (medium and high molecular weight) Tetrachoroenthylene Acetone Outdoors SOx NOx Ozone VOCs (medium and high molecular weight Our solutions can be applied as a complement in particulate filtration technologies, from an individual level in non-professional refrigeration systems to large installations in residential buildings, commercial centers and civil buildings.

Most fruits ripen due to the action of ethylene. Ethylene is the hormone known as "the ripening hormone". It is produced naturally in fruits causing the color, firmness, flavor and characteristic aromas of each fruit to change. However, once the fruit or vegetable has been collected, ethylene does not act in the same way in all cases. Depending on how ethylene intervenes on fruits, they are classified into two typologies: Climacteric fruits have the capacity to continue ripening once separated from the plant. They are also characterized by a rapid increase in the rate of respiration and ethylene release. The most common examples of climacteric fruit are: apples, pears, tomato, custard apple, avocado, banana, mango, papaya, kiwi,.... Non-climacteric fruits, on the other hand, undergo a gradual and continuous ripening process. Once collected, they do not ripen by themselves, so it is important to collect them at the right moment of ripening. Ethylene, in this case, acts in a way that accelerates fruit degradation and senescence. Some non-climacteric fruits are: cherries, citrus fruits, red fruits, cucumber, pineapple, litchi, ... In BION we have been working for 25 years hand in hand with producers and exporters of these fruits and thanks to the accumulated experience we have designed two formulas that allow us to stop in a natural way the effects of ethylene on the fruit. ETHYL STOPPER has been designed and formulated to control ethylene and VOC's (volatile organic compounds) in climacteric fruits. FUNGI STOP is specially designed and formulated to keep climacteric fruits free of fungi and bacteria. All our post-harvest formulations are safe and suitable for organic crop products. They provide permanent protection to the crop from the moment of cultivation to the final destination, maintaining the #air chain and protecting the agents involved from production losses. They can be found in different formats, adapting to the needs of our customers. Sachet Filter ETH Equipment At BION we are experts in maintaining the air chain.